The Halo-Halo Review is pleased to interview authors in the aftermath of a book's release. We are delighted to present Felino A. Soriano. 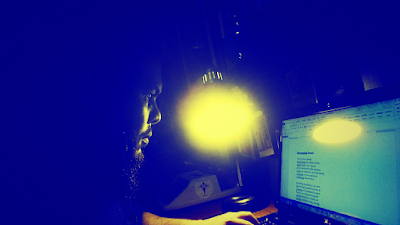 My most recent book is sparse anatomies of single antecedents. 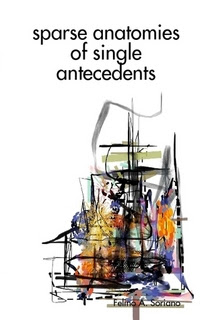 The response has been very positive.  I’ve received various emails and messages through social media indicating those that have read it are happy they did.

A favorite response came from a friend that is outside the literary world. They're very aware of my fixation on, and fondness for, jazz. They told me my writing "looks like jazz." I found this comment very interesting, as I always listen to jazz when writing. The music alters my perception, and thus, my language, and I incorporate the spatial dynamics into the poems that I am hearing within the recordings.

Although I’ve been writing for over sixteen years, and have been publishing for ten, I am always surprised when others compliment/praise my work. The surprises often arise from others’ interpretations of the writings.

I wrote the collection (50 poems) over a span of two weeks.  I also wrote this collection specifically for gradient books.  The poems were created from initial, single words, —antecedents to the fruition of each poem.

I’m finishing up my collection Quintet Dialogues: translating introspection, which is forthcoming from Howling Dog Press, later this year.  This book has greatly transitioned into a collaborative collection which will now include the brilliant artwork of David Allen Reed.  Editor-in-Chief, Michael Annis, is designing the layout.  In conjunction, I started a long series in March called Of this Momentum Song that I plan on writing for many years.  I’ve completed around 70 parts thus far.  I also have various editorships, including publishing my online journal Of/with, —and I’m also multimedia editor for Unlikely Stories, and contributing editors for X-peri, and Sugar Mule.

Felino A. Soriano’s poetry appears in CHURN, BlazeVOX, 3:AM Magazine, The National Poetry Review, Small Po[r]tions, and elsewhere.  His books of poetry include sparse anatomies of single antecedents (2015), Of isolated limning (2014), Pathos|particular invocation (2013), Of language|s| the rain speaks (2012), and Intentions of Aligned Demarcations (2011).  He publishes the online journal Of/with.  Visit felinoasoriano.info for more information.