The Halo-Halo Review is pleased to interview authors in the aftermath of a book's release.  Our inaugural feature is Eric Gamalinda. 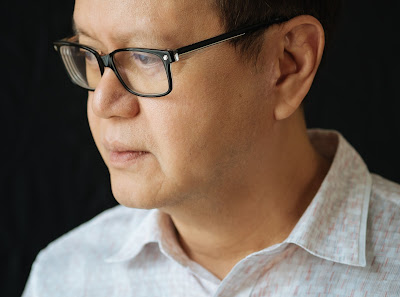 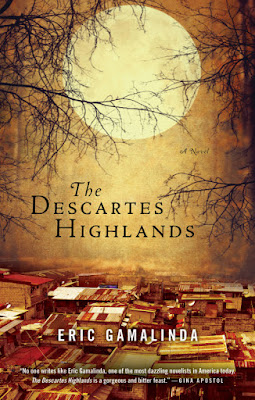 Quite good for an independently published book, I must say. I got a lot of support from indie and web publications, and Granta Online featured an excerpt. Local institutions here in New York have been supportive as well: the Asian American Arts Alliance has been extremely supportive, and Asia Society hosted a staged reading featuring actors Jennifer Betit Yen (who also happens to be president of Asian American Film Lab), the amazing Fil-Am actor Alexis Camins, and Ben Mandell, an exceptionally talented young actor I met when he was a summer intern at the nonprofit where I work. Poets & Writers featured my author video as its Clip of the Day last August (https://www.pw.org/content/the_descartes_highlands). This December, the Asian American Writers Workshop will host another staged reading. Even before the book officially came out last November, the Philippine Literary Festival hosted a “pre-launch” in Manila in October and flew me over and organized a Q&A and book signing. The Q&A session was packed, and the best part was I finally got to meet a lot of young readers who had “liked” me on Facebook. I did a full day of press interviews and photo shoots, and I got to meet one of the other guests of the festival, Amy Tan. While I was boarding the plane in San Francisco en route back to New York, a friend texted me to say she had posted some really nice comments about my work on her Facebook page and on Twitter. I thought her posting both on FB and Twitter was such a generous thing to do, so I’m sharing them with your readers. 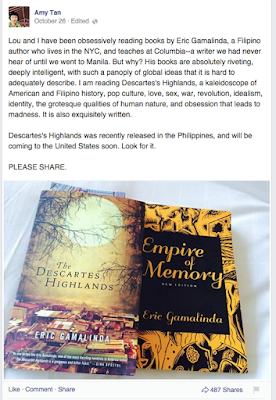 
And here is a screen grab of her tweet: 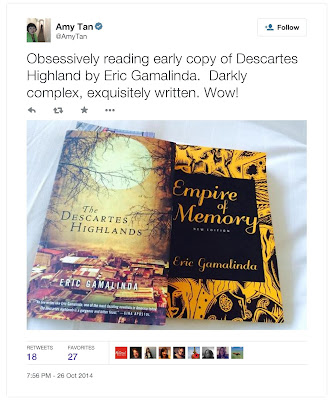 What has surprised you by the response?

The Manila event was the most memorable to me, because it was the first time I actually got to meet people there—I had traveled to Manila three times before, but “incognito,” since I wanted to spend time with my Mom and family. I never expected the book would be so well received. Everyone in Manila was supportive and kind. I’ve figured out, this late in my life, that I really write for them, for who else do you want to connect with than your own people—those who matter most to you?

Here in the US, there have been a few people who came up to me and wanted to discuss the book, and I like that, because they sound like they’ve read the book closely—they understand the characters’ internal conflicts, they understand the darkness, and they appreciate the complexity of the narrative structure.

What I found really interesting about getting this book out is that I’ve come face to face with what Franco Moretti calls “the law of literary evolution,” and what he talks of as the clash—and compromise—of foreign form and local material. Let me explain. Moretti says that rather than just form and content, “world” literature is constructed in a triangle, comprised of a foreign plot, local characters, and local narrative voice. It’s an interesting, and quite obvious, way of reading, though no one has ever articulated it before Moretti (and as you can imagine, it has met so much opposition).

In the case of The Descartes Highlands, the characters are global and multicultural, and looking back I think that was my way of navigating this triangle. I don’t usually read my reviews, but when The Descartes Highlands and, a couple of years before that, People Are Strange (a collection of stories published by Black Lawrence Press) came out, my publishers and some well-meaning people (friends and family who were thrilled to see my name pop up in searches) often forwarded these reviews to me, including some comments on the web. A number of comments I’ve seen have made me reconfirm that as a “writer of color,” you are still perceived through the lens of Western canonical form and content, and consequently, you are deemed strange, imperfect, foreign, exotic, threatening, difficult—the string of racialized adjectives can go on and on. Your narrative voice is never considered for what it is, but is held up against the acceptable, mainstream Western voice; your plot cannot explore other ways of narrative—“intrusive” narratives that may be intrinsic to or necessary for your local voice; you cannot experiment with structure; in other words, not only does “the foreign presence interfere with the very utterance of the novel,” but with the reading of it.

Moretti focuses on the author and the impact of interference in the creative process, but his idea applies to the author’s reader as well, and nowhere is the inadequacy of hegemonic reading so apparent as on the web. This being the web, that inadequacy manifests itself most strongly in the casually tossed comments of a few uninformed, lazy readers, with whom I simply have no appetite to engage. But even some comments that appear thoughtful on the surface break apart when seen through Moretti’s lens. One reader described People Are Strange as “an acquired taste,” as if literature were a pair of chicken feet nestled in a bamboo steamer, or balut. Another wrote that The Descartes Highlands had “a lot of anger…that could only be authorial.” How could anger “only be authorial”? Should one presume that love, joy, excitement, grief, etc. can be imagined, but anger cannot, and must necessarily be the author’s self-projection? I find comments like these a little disconcerting, because, perhaps unbeknownst to the persons who posted them, this all harks back to the seminal years of “Asian American literature,” when Asian writers, mostly diplomats, wrote autobiographical “pleas for understanding” aimed at a mostly white, insular, culturally ignorant public, thereby perpetuating a trend for generic autobiographical “pleas” that has lasted for decades in this our small asteroid of the literary universe. So someone who makes an off-the-cuff statement like that implies that we are still bound to that normative genre; or perhaps he is simply unfamiliar with the creative process. Either way, it’s part of the intellectual lassitude that has become common on the web, so common that we have nonchalantly accepted it. There’s a walk-in character in The Descartes Highlands who spends all her time posting negative comments on Amazon.com simply because she relishes the misery she imagines the author would go through. If only she had read Moretti. As for me, I have asked people to stop sending me reviews, but if they do I just keep in mind what Andy Warhol once said: “Don’t think about what they write about you, just measure it in inches.”

Many people have commented on the sex and violence in the book, but I do wish they’d explore further how these play into the narrative. They’re obviously there for a reason, and if they jump out of the page, there’s a reason for that as well. Sex and violence are two actions that only humans can ponder on, and it’s this intellection that separates us from the rest of the animal species. Sadly, intellection is largely absent in today’s market, where violence is entertainment and sex is titillation. That makes us—mere animals? Filmmakers like Michael Haneke, Lars von Trier, and Carlos Reygadas have tried to infuse deeper, darker, more complex meanings into their use of sex and violence, but of course only a few people are familiar with their work, much less understand what they’re trying to do. I don’t like to state the obvious, but looking back, I wonder if I should have had some of the characters explain what was going on in the book and in their lives. But I hate it when writers abhor ambiguity, when they make sure you *get it*. I put my trust in the reader who is intelligent and perceptive; I have not lost hope that there are a few of them out there.

But to state the obvious: the violence is mirrored in the life of the father, who experienced horrific scenes during his incarceration in the Philippines, and the lives of his two sons, who undergo a different kind of violence: from the violence of rightwing fanatics to the more subtle violence of social indifference and co-dependent relationships. For these trapped souls, I wanted to create an atmosphere of pervasive, abysmal loneliness, because that’s what loneliness is, and to create something short of that overpowering, disabling emotion, to romanticize or candy-coat it, is to be deceitful. Even the sex is empty and unfulfilling; you might say they are acts of despair. I wanted that to stand out as a comment on our inability to make deep and meaningful human connections today. Especially in the stories of the two sons, who eventually manage to contact each other through the Internet, the absence of this human connection makes their loneliness even more stark, and their search for love more desperate.

Geography, or space, also has a symbolic significance in the book. Mathieu’s world is expansive and global, Jordan’s is a bit claustrophobic although he does live in a sprawling, global city, and the father’s is extremely small and limited; in fact his narrative is told from a cramped jail cell. I intentionally created that stark contrast, and I wanted the stories to zoom in and out from a tiny, claustrophobic cell to expansive vistas, such as the view of the Mediterranean or the wild seascape of San Crisostomo—here is a young man writing from a minuscule space, looking out longingly at the moon thousands of miles away, and here are two men who in varying degrees have a lot of space to move in, yet are imprisoned by their delusional ruminations and sterile emotions. All three of them live in a cage that to a certain extent is of their own making—the cyclical repetitions of the eternal return.

Finally, not many people seem to notice that the novel—in fact all my works—have a lot of humor in them. The humor is dark, dry, and deadpan, and often overpowered by other surrounding emotions, so I’m not surprised that people tend to miss it.

I have a lot of ideas for novels (and other stuff) and I’ve been churning out a bunch of first drafts as much as I can. I am aware that writers burn out in their old age and I’m hoping I can stock up on enough material to work on, to revise, polish and complete, when that happens to me, as I know it will—that final, irreversible winter. Right now I’m taking notes for what I consider will be my final book. I don’t want to talk much about it yet but it’s a story about memory, identity, destiny and moral responsibility, and it takes place across space and time, both in the real and virtual worlds. This is the part I enjoy the most, when ideas are spinning in my head and the characters are starting to take shape, and starting to talk to me and to one another. This is the fun part before the difficult and lonely task of whittling everything down with the hard chisel of language.

ERIC GAMALINDA has previously published, in the Philippines, a collection of short stories, three poetry collections, and four novels, including My Sad Republic, winner of the Philippine Centennial Prize in 1998. Born and raised in Manila, where he worked as a journalist covering everything from politics to rock music, Gamalinda currently lives in New York City and teaches at the Center for the Study of Race and Ethnicity at Columbia University. The Descartes Highlands is his latest novel.