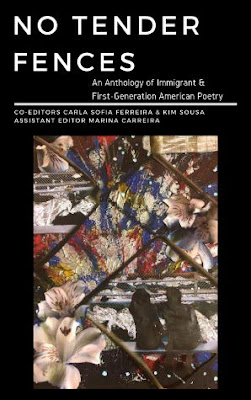 No Tender Fences: An Anthology of Immigrant & First-Generation American Poetry is a collection of borderland poets and many varieties of immigrant poets sharing their poems, their stories of frustration and heartache—themes that thread, bend, but never break.
The voices of Filipino American poets resound and weave through this entire collection such as a notable opening of feminist Pinay poet, Barbara Jane Reyes’ “Wisdom’s Rebuke” which sets the solid tone:
You don’t get to catalogue me. You don’t get to warehouse me. You don’t get to rescue me. You don’t get to touch me. You don’t get to explain me. You are not the standard by which I judge my own worth. You don’t get to draw my boundaries.
Fuck your tender fences and applause.
Keana Aguila Labra’s poem “Roll Call” raises the objection for assimilation:
“assimilate, assimilate/ I thought, if I keep my eyes downcast / I prayed they will not call on me” and the speaker continues in response to white society that forces compliance and complacency, “I scream. / Though, it may not necessarily define me, / it is a part of what became me / and I ache at the thought of having/ forsaken it for so long.”

Incredible is the stance that Janice Lobo Sapigao takes in her poem “[all talk indistinctly]”.  The speaker compares Netflix captioners to “an all-white jury / approaching their work / like college students” and how their non-committal and white privilege allows them to misspell “womxn of color speech / and people of color names / receive rushed sentences / and incorrect interpretations, spelling a laziness that/ puts us out of sight on-screen.”

José Edmundo Ocampo Reyes’ “Portrait of Edmund, Son of Gloucester, as an Undocumented Alien Reading the Sweepstakes Rules and Regulations” is a clever riposte to the past and present, the cultured turned as the peasant outsider: Edmund, the fictional character in Shakespeare’s “King Lear” as an undocumented alien. “No purchase necessary. / No amount will ever suffice. / You will be automatically entered into a sweepstakes drawing when you complete and/submit an official entry form. / Your signature is a broken key” – a stark and telling reality of unattainable ideals seen through a person with no rights to the American dream.

A triptych of poems instills in us what it is like to not understand a choice forced upon us when we are young, when we had no agency—a telling account through a child’s eye three years before the actual passage into a new questionable land, described in Eileen R. Tabios’ poems: “When I Was 8”, “When I Was 9”, and “When I Was 10”.  In “When I Was 8”, the speaker places the assassin as an idea that tries to kill the father, the patriarch of stability into instability and invariably becomes another father in the speaker’s own displacement. Again, the displacement looms in “When I Was 9”, in which the speaker mourns the possibilities such as learning music never realized because “In the diaspora, / even music can be as dirty as a refugee”.  Lastly, the triptych ends with a one liner that hangs like heavy air in “When I was 10”: “I left my birthland—a wound impossible to heal”.

Which segues into the next Filipinx voice, “Confessions of a Transplant” by Angela Narciso Torres.  It opens with “My first year living in America / the scent of frying garlic / sent me weeping.”  The poem is a litany of missed flavors and scents of an old homeland—a lyrical residence of sweeping imagery and nostalgia.

Luisa A. Igloria’s “Migrant Letter” is tender and wanting with a voice of grandmothers, memories of loves left behind, the unfathomable constant meandering, “Where will you be tomorrow? / Just when I thought you would stay, a letter / arrives with another forwarding address.”

This ambitious collection that addresses first generation immigrants’ perspectives and experiences are still relevant whether a first gen person has been in the U.S. for many years, or if the first-generation experience is fresh—which probably poses new challenges given the present political climate and is why an anthology such as this is needed more than ever to help guide and be a reminder.  These Filipinx voices give rise to the momentous precipice, slicing right through colonial histories, deconstructing, redefining the New World—this world in which the diaspora exists and reclaims with strong vibrato and bold pronouncements insisting to be seen and heard.

Cristina Querrer was born and raised in the Philippines, post Vietnam War, during the Marcos regime, pre-Mount Pinatubo eruption, as a (US Air Force) military child. Her works have appeared in The Adirondack Review, The Fairfield Review, Stirring, and in print anthologies such as Pinoy Poetics, Babaylan, Bombshells, The Mom Egg, and Field of Mirrors. Querrer has two published books of poetry, “By Astrolabes & Constellations” and “The Art of Exporting”.  She is a U.S. Army veteran, has an MFA in Creative Writing, and is a writer, artist and podcaster at http://youartsygirlpodcast.com/episodes in which she features Filipinx poets, writers and artists as much as she can.