AMERICA IS IN THE HEART by CARLOS BULOSAN 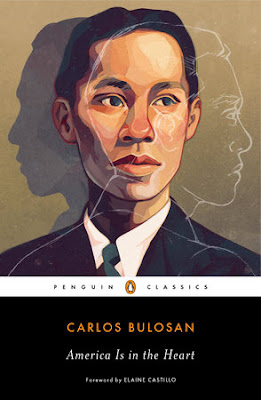 America Is in the Heart by Carlos Bulosan
(Penguin Books, 2019)

Penguin Books confers the label “classic” upon America Is in the Heart in this edition. The categorical title is debatable; it suggests a personal quest motif—searching for America. Is America a place, or a state of mind? It becomes the latter for Bulosan because the places he wanted to belong, rejected or threatened to corrupt him. America was in the grip of the Great Depression; jobs were scarce for all citizens and immigrants alike. He found the Filipinos in America depraved by gambling and drinking.  It took awhile to “find” America in the kindness of strangers, the love of friends and books he read. Hence, he located America, not in the brain, the seat of reason, but the heart—the seat of love.

As a memoir it combines both autobiographical and fictional elements. The autobiographical are the factual events of his life--his peasant family tilling the lands of absentee landlords for a pittance, indebted to usurers, and journey to America in quest of a better life. The fictional elements include such literary devices as allusions (Robinson Crusoe, Moses, and Richard Wright), embellishments of closely observed details (a young girl walking “like a fawn dancing before the doe,” “pimps and prostitutes . . . as numerous as the stars in the sky,” borrowing a biblical hyperbole.

I find hard to believe the twice-used trope of the narrator Allos, Carlos’s nickname, injuring himself after falling from a coconut tree in the rain. It is as dubious to me as the claim that a coconut product is “organic.” This is probably a reason Epifanio San Juan Jr., who writes the “Introduction,” is skeptical of memoirs, as he tells me in an e-mail. Nonetheless, he is acknowledged as the foremost authority on Bulosan by focusing on the factual autobiographical and thematic elements, and not the fictional as this review does. In his rebuttal of critics who “misread” Bulosan, San Juan deploys his arsenal of Marxist criticism, from the militant to the utopian, and will probably also take me to task.

Elaine Castillo, who writes the Foreword, takes on the title’s categorical assertion, and calls her debut novel America Is Not the Heart. (I have not read her novel that was long-listed for the Center for Fiction First Novel Prize.)

Jeffery Arellano Cabusao in the Appendix includes selected letters of Bulosan and gives directions for further exploration. He has published a marvelous anthology, Writer in Exile/Writer in Revolution. This useful compendium on Bulosan could very well serve as a companion volume to the Penguin edition.

Early in life Allos marks the beginning of his self-consciousness, and later his ambition to become a writer. At first he wanted to become a doctor, but his memories gave him “a strange courage and the vision of a better life.” He added, “Yes, I will be a writer and make all of you live again in words.” Bulosan the person may not have found America, but Bulosan the artist did. The artist writes because he loves to write, and where else can you find love but in the heart?