THE QUIET ONES by GLENN DIAZ 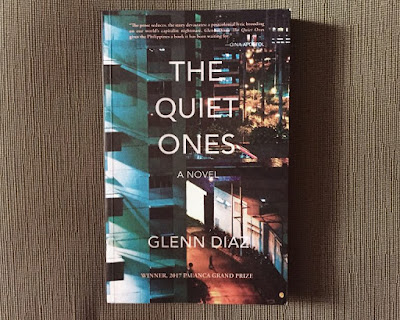 Without doubt, The Quiet Ones by Glenn Diaz is a lyrical, omniscient articulation of rage over capitalism and its repercussions to human frailty. This rage, however, is not limited to rants, hiccups, disgruntled groans and sarcastic chuckles which emanate a weak and unfounded work of art. In every utterance and dialogue in this 45-chapter entity of interlocking narratives, a social commentary on Filipino lifestyle in the context of neocolonization and globalization is evident in its immediate resonance, and the reader must not wait for its soonest explication.

With his gift of language, Diaz enumerates ruminations the characters have aspired to acquire (but as the plot thickens, they are destined to embrace and live up to) from the ruins of their own transgressions. With one press of a button, the conflict dramatically surges up to its untamed destination. And the framework of the telling seems to render the reader a conclusive insight that that conflict regulates all the movements and life-redefining decisions of the characters. But this "centrality of action"---which is Alvin Estrada's escape from the police and from a world he mistook for having created and controlled---provides some spaces for the reader to study the lives of the "conspirators": their past characterized by monotony and dissatisfaction from a life survived everyday with a churning stomach and a wailing illegitimate child; their present finding themselves in the realms of seeking pleasures and justifying actions against morality and norms of living; and their future lost in assurance unless their criminal operation is put to an end.

It started with curiosity rooted in desperation. And it became a trick of a hand. When the news of it was shared among colleagues, and when wads of money overwhelmed their drooling mouths tired from answering eccentric clients, they were out of their leagues. Desires of the flesh soared in varying degrees and relationships---in the family, in the workplace, between partners and "thirsting" pedestrians---faced adverse effects. The effects of a deed fueled by unnamed and unmanageable desires, this is what novel captures with fervor and gracefulness. And this is what literature take on record: our individual and collective perspectives against the effect of change, chance and choice.

The critically acclaimed novelist, who blossomed in the Philippine literary scene with short stories anthologized in local and international literary publications, is surely a man of depth and research. The cadence of every sentence and paragraph of descriptive elegance, bordering on the style of F. Sionil Jose, Butch Dalisay and Miguel Syjuco, is a product of detailed consideration of a country's geography, popular culture, modes of consumption and political upheavals. Very few Filipino novelists could master the defragmentation of personal experiences vis-á-vis bringing to the reader's consciousness and memory the sophistication of language Diaz has officially poured out in this masterpiece. I believe this magnum opus is an exhaustion, of draining the energy which would have been, or might have been, left in the authorial circumstance, so unrelenting that until the form finds itself, until the author's yearning for completeness is achieved, he will never cease. Indeed, this radical attempt to shift the "serious literature" lovers' preference for the romantic, didactic, idyllic and representational to the emerging and lately recognized canon of works working on the themes of cosmopolitan vileness, homoeroticism and eternal quest for self-love, is a product of rigor evidenced by Diaz's winning the much-coveted Palanca accolade.

The Quiet Ones redefine my perspectives on life and literature.