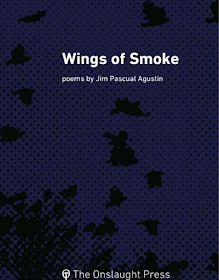 Wings of Smoke by Jim Pascual Agustin
(The Onslaught Press, 2017)

The strong grip on both imagery and lyricism is never lost in Jim Pascual Agustin. Since the publication of Alien to Any Skin and Sound Before Water – both are titles under UST Publishing House in the Philippines – Agustin’s language wrought with simplicity and fused with sincerity has never escaped the limelight. Instead, and what is expected, poems under his pen rendered an altitude of radiance and a profundity of thought. A verse dwelling on the schoolyard abounding in licorice metamorphosed into one relating a passenger’s looking at car wipers as francolin feathers in search of a lair. A haiku retelling a boy’s hitting a puddle with a pebble evolved into an epic of a midcareer man filling a “dead / bird with his letters, / glittering black diamonds.” His poetry of gentle explorations and melodramatic explosions resonates, in heightened clarity, in his newest poetry collection, Wings of Smoke proving that a scribe of Filipino origin traversing the perils of a distant land can create his own map, where veins “thinner than threads” are cut open for everybody to stare at.

If there’s a term such as “international interiority”, that would be the impetus of Wings of Smoke. The poems in this collection transcend geographical boundaries, as influenced by the author’s inclinations in international affairs, particularly the events that recurrently haunt the political arena of Philippines and South Africa. In this quest for international relevance as the poet injects in his poems like “Unbearable” and “That Feather Could Be Yours Someday” the endeavor of enshrining shared humanity, the invitation of interiority asserts its presence. Readers are urged to “look out and think within”, for all the poems in this book unite to actualize a mission – to exhort that silences can bridge territories, that pauses between utterances long for a collective sigh.

Readers are roused to feel fear, so that courage could reprise from a deep sleep due to exhaustive ignorance of issues of the land. In the first poem “Open Air Cinema in the Rain”, we remember “the ridiculous / fear we felt when the sound / of hooves on damp ground / invaded our meanderings” But in the end of our trepidation over an impending rain, “umbrellas / like black mushrooms / sprout on the benches.” Narration, imagery, paradox, and melody melt into the multitude of a poem. And this amalgamation is a consolation in itself.

Wings of Smoke distinguishes itself from Agustin’s previous work A Thousand Eyes (UST Publishing House, 2015) with the former’s more expansive grasp of themes, like a flight of crows flapping their dark wings over frozen waves, like “leaves caressing / the roof.” However, this wide array of narratives reminisced by the persona impassioned in his observations does not immolate lyricism. Agustin doubtless has the knack of captivating readers with his symmetrical line lengths and unpredictable line cuts, not to mention the euphony in the simplicity of his diction.

The crows in unison fly above the football stadium’s scoreboard, and it is still a beautiful sight, with the birds’ asynchronous trebles in harmony with their pitch black feathers assuming a globule of conquistadors. That’s how Wings of Smoke works for its target reader, far from a poem’s “mistaken” force of ostracizing a reader from the society, pushing him to bite his own fingers in his room while pretending to reflect on life. The only way to think within is through looking out and “seeing” the world with eyes “no more / than an old coin in the mud.” The courage to continue fighting our individual battles requires seeing with a pair of unblinking eyes, so that quotidian moments with promises of astonishment will never slip out of sight. So, in the end, we will be “immune, / to the sudden darkness.”

If there’s no such term as international interiority, it is time to associate its existence with the pen of Agustin.

Aloysiusi Lionel Polintan is a Senior High School Coordinator of Divina Pastora College in Gapan City, Nueva Ecija. He loves reading and writing poetry, and everything that ranges from Bob Dylan to Hozier, and from Mahalia Jackson to Christina Aguilera. He is doing research on intangible cultural heritage of Southern Novo Ecijanos. He maintains a blog: http://renaissanceofanotebook.blogspot.com